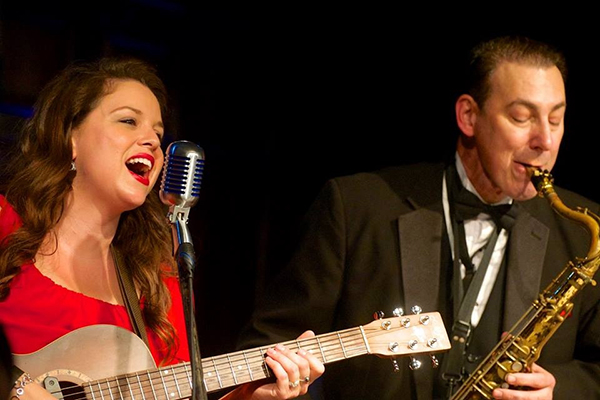 With Jonathan Stout on guitar & Marquis Howell on bass

with “The Big Butter Jazz Band”

The Michael Arenella Quartet at the Algonquin

The “Gonk” opened in 1902 and is home of the infamous Algonquin Round Table meetings where Dorothy Parker and her gang held court during New York City’s most glamorous era, along with F Scott. Fitzgerald, Ernest Hemingway, Harold Ross, Alexander Woollcott, Talulah Bankhead, Margalo Gillmore, Jane Grant, Margaret Leech, Frank Sullivan, and Peggy Wood, among others.

Come relax in the historic lobby’s plush armchairs, treat yourself to a nightcap, and listen to some tunes into the night!

Dan Levinson’s Bogeymen with Molly Ryan + 35 other performers including 4 bands on two stages!

Jazz Manouche – literally “gypsy jazz” – is an exotic brand of swing music, born in France in the early 1930s. The Lord and Master of Jazz Manouche was Django Reinhardt, a gypsy born in Belgium in 1910. In 1934 Django began a series of recordings with a group called the Quintet of the Hot Club of France. These recordings have become the foundation for a massive group of devoted Django followers throughout the world, to whom Jazz Manouche is more than a kind of music: it’s a way of life. Clarinetist Dan Levinson discovered Jazz Manouche while living in Paris in the early 1990s and was mesmerized. In 2004 he assembled Fête Manouche and since then has been keeping the Django legacy alive in the New York area, captivating audiences both young and young at heart.

Discounts for groups of 12 or more

with THE BICKFORD BENEFIT BAND

This annual event to raise money for the Bickford Theatre and its parent, the Morris Museum, usually sells out, so don’t wait to buy tickets at the door and be turned away.

This is going to be a truly spectacular evening of hot, stompin’ jazz, featuring an all-star ensemble. Don’t miss it!